Send us a Mail

Georgia is situated at the junction of two continents: Europe and Asia, and occupies 69.500 sq km. the north Georgia is bordered by the Caucasus Mountain Range and the west by the Black Sea. The country’s population is about five million people.
Georgia has a rich variety of natural features including the eternal snows of the Caucasus which lie quite close to the caressing warm waves of the Black Sea and its humid subtropics. In other regions, lush Alpine meadows give way to plains and highlands. The valleys of Georgia sparkle with the emerald verdure of Kakhetian and Kartlian orchards and vineyards.

A tourist arriving in Georgia could find himself living in all four seasons of the year at once within a short span of time. Such a diversity of natural conditions is due to the mountainous terrain. Over 80% of Georgia is covered by mountains and hills protecting Georgia from the cold airflow from the North. This explains the fact that the climate here is mild.
The Georgian language is one of the oldest living languages in the world. Georgian script dates from IV-III centuries B.C. (as mentioned in the Assyrian manuscript ”The Book of Peoples & Countries’’).
In ancient Greek mythology, Georgia is known as the land of the Golden Fleece, Princess Medea and rebellious Prometheus. In antiquity it was the easternmost pocket of Mediterranean cultural influence. Having adopted Christianity in 337, Georgia became one of the first countries where the new religion was elevated to the rank of State authority.
Proof of Georgia’s ancient culture is evident in architectural monuments, murals, paintings and sculptures: the caves of Vardzia, Upliszikhe, and David-Gareji; the churches Svetitskhoveli, Alaverdi, and Jvari; the towers of Svaneti and Kakheti, as well as remarkable works of ecclesiastical and secular literature crowned by Shota Rustaveli’s poem ” Knight in the Panther’s Skin,” written in the XII century and translated into many languages. 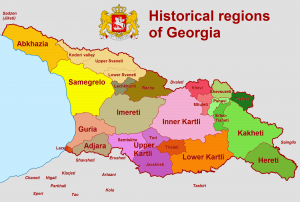